It had been two years since I had last raced at Vire in Northern France where I got dropped every stage. I went with the aim of hanging in for as long as possible whereas this year I went with the aim of being a contender. We arrived the day before the first stage and went for a cruise around a section of Stage 1. I was feeling pretty good having had an easy week running up to it.
Stage 1 (120km)
Stage 1 was the longest and in my opinion the hardest stage. It started in typical French fashion: flat out and with attacks every five seconds with no one being allowed to get away. I tried to keep out of the wind but I found myself doing more efforts than I wanted in the first 40km. At around this point, a split in the peloton happened which I missed. I could see the group of around thirty hanging about twenty seconds off the front. Just after getting a bottle from the feedzone, I knew it was now or never so I attacked over to a rider who was attempting the bridge. I looked back and annoyingly no one had followed which was not ideal. The rider I got to was in no shape of chasing and he went back to the bunch quickly so I was left bridging solo with around 70km to go. I made it after 15 minutes or so but I was in an absolute state. After begging the Commissaire’s car for water I sat in and found Brennan. I was cramping so bad which was strange as it had been years since I last cramped but I guess the roasting temperatures didn’t help. I hung in and threw many gels down and as much water as I could get but I knew I was going to have to push it to the limit to stay in this group. I was struggling to push threshold watts without cramping as we hit the finishing circuit. As we cruised round I found Hitch who we’d lapped but he’d jumped into our group. He dragged me around and helped me hang in to the end. Brennan went on the attack but unfortunately couldn’t bridge to the two up the road so he finished about ten seconds ahead of me. I somehow got 28th which I was happy with considering my state. I was a shell that night and felt sick and couldn’t eat for four hours but after Cullen’s stretching routine and a session on the foam roller I was feeling surprisingly alright.
Stage 2 (60km)As I was riding to the start that morning my legs were actually feeling alright. Luckily it was raining too so it as much cooler and hydration wouldn’t be as much of a problem. The plan for the stage was to get Brennan up near the front for the ride out to the Mont Bertrand finishing circuit and then potentially send Cullen up the road as he was ‘looking forward to ripping it up in the big ring’. I stayed as close to the front without making any big efforts apart from on the climbs. Brennan did his stuff on the climbs two minutes up the road whilst Ash and I ‘cruised’ round holding our position. I finished 28th again so not too bad for a hilly circuit! I lay 23rd overall on GC but Brennan was in touching distance of the overall so Stage 3 was critical.
Stage 3 (80km) 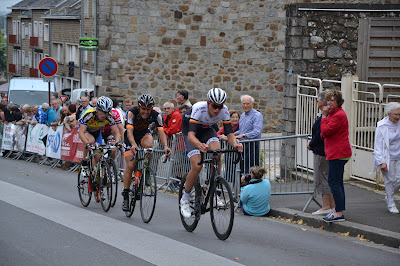 This was definitely the sort of stage I could do well on so I put myself right up near the front to help protect Brennan and monitor any moves. Predictably it went from the gun and before long a break of ten or so got clear. I told Hitch I wanted to go across so he set me up for the attack by dropping off my wheel on the drag out of town on the second of eight laps. After dragging around some guy who didn’t pull a single turn before exploding a lap later, I finally made it across in a couple of laps. My legs were feeling really good and with a gap of 1:50 on the peloton I knew this could work. With around three laps to go the gap was down to 45 seconds and a load of the break sat up. Five of us pushed on and immediately taking turns became an issue. Not being able to speak French was not ideal and I could see they were just not going to work. I tried attacking but couldn’t get away so just rode flat out to the end to stop any other attacks. I knew I was going to get jumped and I gave my best shot at a sprint but my legs were done. I had to settle for 3rd so I managed my first foreign podium which was a nice achievement. Brennan had attacked off the front of the peloton and managed to win the overall classification joint with another French rider. He had a great ride all weekend.
In the end I managed 9th overall so I was super pleased with my result to get a top 10 in GC and 5th Espoir. I even got a few KOM points! I’d like to thank Andrew Parker and Simon Aske for taking the team out there and supporting us throughout the race as well as Dad and Ken who also came out to support the team.